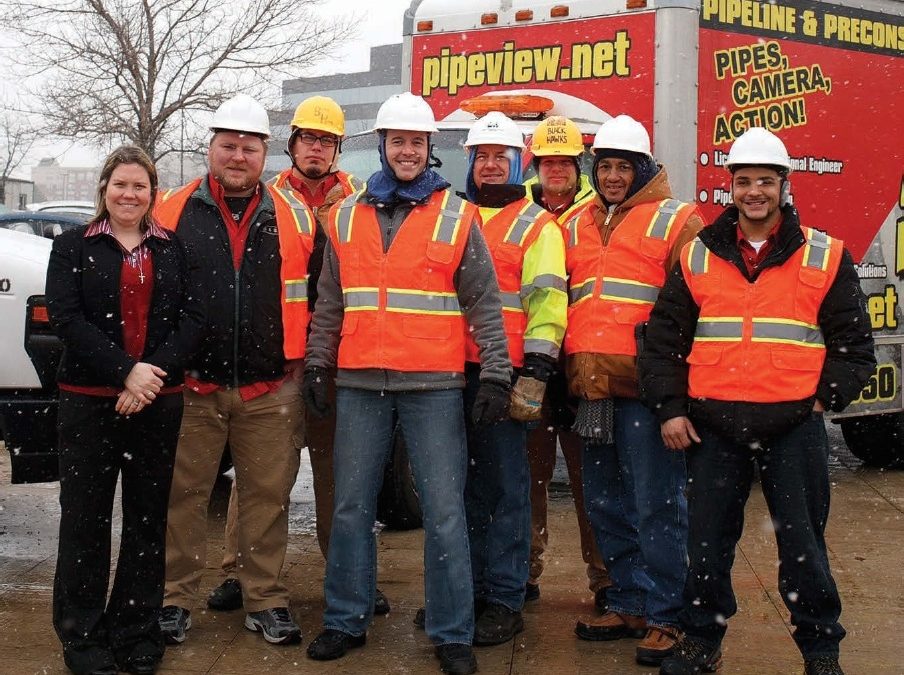 A View From Above

When licensed civil engineer Nick Mathey first heard about televising sanitary and storm sewer lines he had just completed designing a subdivision, complete with roads, retention ponds, and sanitary and storm sewer lines. The reviewing engineer said the plan looked great, but noted in the specifications that the contractor should have sewers televised before acceptance by the municipality.

“My thought was, ‘What does this mean?’” Mathey says. “I didn’t know about this, but I went and found out, thinking what a cool thing the technology was — somebody playing with a robot collecting data. I knew this was something I would enjoy doing. I thought I would be able to add an engineering flair, and perhaps give clients more value. As an engineer I would be able to talk with people at a different level and hopefully provide an edge to the process.”

Pipe View was born. The young entrepreneur already had a full-time job, so his new endeavor was often overwhelming in those first years as he gathered clients and subcontracted televising jobs in his off hours.

In the beginning, Mathey televised storm drains and worked on pre-construction projects where he inspected lines under roadways to document conditions. Although he initially targeted contractors, opportunities soon opened up with municipalities, and he eventually expanded his services to include sanitary lines. In 2013, the company branched out into gas and power line inspections for several utility companies, which became a major part of the business.

Mathey initially designed and used his own camera and transport systems, which performed satisfactorily, and he ran the business on his own. However, he soon realized that for Pipe View to succeed, he would have to focus solely on the business. The comfort of a full-time job had to go, and the equipment would have to come from established CCTV manufacturers.

By 2010, Mathey had partnered with Gary Rabine, whose group of companies offered complimentary services. Pipe View subcontracted for those operations, and Mathey secured office space with Rabine and shared supporting services in their Schaumburg, Ill., facility.

The transformation was in full swing, and by the end of 2013, Mathey had four NASSCO certified technicians and five Aries Industries CCTV vans on the road traveling as far away as Colorado, Mississippi and Illinois to provide TV inspections. Staff also included three team techs, and office assistant Grace McCafferty. Mathey’s father, Jim Mathey, works for Pipe View, and initially, his grandfather, Paul Goralka, went on some of those early service calls.

Mathey also credits his supervisor, Bill McCafferty, who oversees his own CCTV van and two others.

Mathey’s many long hours doing nighttime inspections and running the operation were paying off, and he was able to turn his attention to estimating, servicing existing clients, setting goals, promoting Pipe View and, most important, pushing his team to a high standard of excellence. He also began exploring new avenues for advancement in pipeline inspection technology.

The winning team includes Mathey and his employees, Rabine and the Rabine Group, and Aries because Mathey considers the manufacturer an essential part of the circle. He continually consults with Aries engineers on equipment performance and innovation. He also depends on family support, even down to his little daughter, Hannah, who named the Aries camera “Buddy.”

When Mathey committed to investing in the camera system in 2010, he invited several top manufacturers to visit his facility, and after careful evaluation, he settled on Aries.

“My plan was to bring a new level of expertise using these neat tools in verifying the conditions of pipes and finding obstacles,” Mathey says. “But I wanted the tool to be chiseled out of engineering basics or standards, explaining why we do things, such as by providing summaries at the end of a project. That is kind of what engineers do in determining a goal. You look at something, and put together a conclusion or summary as to what you found with the data. This is why we send our technicians to become NASSCO certified.”

In 2011, Mathey realized lateral launching was an opportunity to expand service for his customers. The company had primarily televised mainlines before that point, but the technology has been a boon for Pipe View and now represents up to 95 percent of the business.

“When we offered this, I wasn’t that surprised that it took off so quickly,” he says. “But I did see it as a risk in the beginning. This has proven to be profitable for us, and gives us an area where we can use our expertise and our ability to document — to give that engineering flair I looked for, to use all of our tools. It has been a great fit for us.”

The NASSCO training and standards offer more than just guidelines for inspecting pipe; they provide parameters for proper documentation.

“We want to document, diagnose — and if requested — design the solution,” Mathey says. “We don’t just say what is going on, but why it is going on. We offer to design solutions. To simply document is like a flat soda.”

Pipe View has inspected miles and miles of storm and sanitary sewer lines in the past few years. In Colorado, the company is televising lines running under roadways scheduled for surface improvements.

“Wherever you have hard surfaces, there will usually be sewers underneath. If a company is improving the surface, why not know what lies beneath?” Mathey says.

Mathey says they have televised 4- to 72-inch lines, but pipes are typically 8 to 18 inches. They find everything from collapsed and broken pipe to roots, cracks and even animals that have moved in. Some pipes are no longer round, some are underwater and some have dips that hold water. For the team in the field, his goal is to share the vision and show the big picture.

“I want them to have instant connectivity and transparency for the work of the day. That is what is important,” Mathey says. “Our customers do not want to know this week what was done last week. They want real time. We want real-time activities, real-time connectivity.

“Part of that is listening to the ideas of the technicians,” he says. “We are always changing our standard operation or procedure. Not big changes. Little changes. Somebody comes up with how to do something differently. We implement it. That is a big deal to us. These are the guys doing the work. This is like a suggestion box. My guys are always sending a text or an email to make a suggestion. They have ownership. Part of our quality control process is giving rewards. When we are looking for something in a pipe, and they find it, we give a bonus. Something like a utility that crosses the pipe, that’s an instant bonus. We don’t reward for the number of units televised, but for the quality of what they find and accomplish. The last thing our clients want is the numbers. They want results.”

Because Mathey sends his technicians away on one- or two-week assignments, he describes his management style as that of a leader with a vision who inspires his employees to follow. As a manager, he sees that his job is creating strategies and implementing goals. Basically, he wants to have the right people in place, people he can depend on during these assignments.

“Typically, we will have one box truck with a two-man crew on a site to service a job to inspect 12,000 lineal feet of pipe in a week,” he says. “A two-man crew will consist of the lead man and a technician. Each position is important, but the truck belongs to the lead. It is his truck. The goal for each technician is to achieve a lead position. We want our people to have a sense of wanting advancement, and this becomes a ladder they can climb to their full potential. This helps us achieve a good cohesive team. Furthermore, when we add a new truck we will have a lead in waiting.”

Mathey visits remote job sites if there’s a new job or client, or as the project demands, but he has complete confidence in his team. Additionally, daily report cards for each truck show the quantity of work done or the footage in lineal feet – whatever the project requires.

“With these reports I know in an instant how a job is going,” he says. “We work in harsh conditions, and maintenance of equipment is always on our minds. When we have a problem with our equipment, there is always a backup camera, and Aries also has plants in Atlanta, California and Wisconsin should such a need arise. But this is where our training comes in. Every van has a toolbox, and our crews are trained to handle the most critical issues that can come up on this equipment. There is not much our guys have not seen, and they know how to adapt. There is a lot about our business that is not cut and dried. You have to have adaptability to be successful.”

All comforts on the road

A significant portion of Pipe View’s work comes through the Rabine Group, which handles maintenance, asphalt and paving. Pipe View also gets referrals from Rabine for other contractors.

While providing a solution in each situation is one of Mathey’s goals, it’s not always part of the project. He says they do suggest options and strategies, and generally consult with clients right in the field.

“We don’t bring data back to the office because most often we are on site to discuss the job. For us, it is all about timing. Real time. Real-time connectivity in the field. Providing the information our clients need. That sums up our goals.”

A View from Above was originally published as the cover story in Cleaner Magazine’s April 2014 issue. For more information on Pipe View, visit www.pipeviewamerica.com.